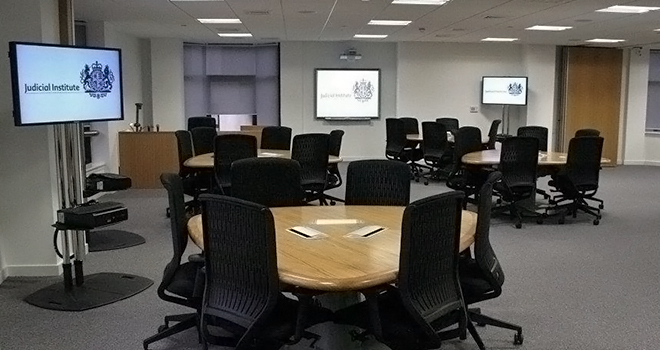 The Judicial Institute for Scotland provides education for Scottish judges.

Its guiding philosophy is that judicial education is judge-led, judge-devised and judge-delivered. Face to face training is delivered in a modern learning suite located in Parliament House, Edinburgh, at the heart of Scotland’s Supreme Courts. This training is developed to address the needs of a modern judiciary in a changing environment and the Institute is agile and creative in its design and delivery. Courses cover the core areas of judicial practice including sentencing, criminal law, family, private and civil law. Judge craft skills are taught pervasively across the curriculum, as are issues of social context, equal treatment and judicial ethics. Specific courses have been developed to respond to modern challenges including domestic abuse, vulnerable parties and child witnesses.

In addition to face to face courses, the Institute develops and publishes online resources for practising judges including a number of benchmark texts such as the Jury Manual, Civil and Criminal Bench Books and the Equal Treatment Bench Book. The Institute’s intranet, the Judicial Hub, is the central repository for briefing papers, case notes and other essential publications all created or curated by the Institute itself.

The Institute’s strategy and business plan are set by its Board which is comprised of 2 senators of the College of Justice and the Institute’s judicial director and deputy director, both sheriffs seconded to the Institute in those roles. An Advisory Council comprised of judicial office holders from all levels, and lay members including one from an educational background, assists the work of the Board.

The Institute undertakes benchmarking in order that the Scottish judiciary benefits from world-leading approaches in respect of modern, relevant and practical judicial education. It plays an active role in the European Judicial Training Network, and the International Organisation of Judicial Training, and has formed a partnership with the National Judicial Institute based in Ottawa, Canada. These associations enable access to extensive resources, and training exchanges on an international level. The Institute regularly engages with both the Scottish and UK governments and with other external agencies on matters relevant to its function in supporting the judiciary.

The Institute also prepares and publishes benchbooks and a variety of papers on new legislation and complex areas of law on its Judicial Hub, a bespoke platform for Scotland’s judiciary. Public facing documentation, such as its strategy, business plans and annual reports as well as some public versions of documents, can be viewed on the publications page.

The Lord President of the Court of Session became Head of the Scottish judiciary in April 2010, with the implementation of the Judiciary and Courts (Scotland) Act 2008. That legislation placed upon him responsibility for “making and maintaining appropriate arrangements for the welfare, training and guidance of judicial office holders”. In terms of the Tribunals (Scotland) Act 2014, the Lord President assumed responsibility for the training of tribunal judicial office holders. As Head of the Scottish judiciary, he delegates responsibility for the delivery of judicial training to the Judicial Institute’s Board. The operational work is led on behalf of the Board by the Institute’s Director, Deputy Director, and Head of Education.

The Lord President agreed the terms of the governance framework which came into effect in 2021.

The Judicial Institute was established in 2013. Previous to that, the Judicial Studies Committee operated from 1997 – 2012, introducing formal judicial training in the Supreme Courts and in the sheriff court for the first time.

Judicial College for England and Wales

Judicial Studies Board for Northern Ireland